Well, here is the hole story about Hole in The Wall on the famous Drag of Austin, TX. As it is one of Austin’s most legendary venues and bars, it was founded in 1974 conveniently places across the street from The University of Texas and still remains through all the cultural shifts. Hole in the Wall has hosts many success stories for local musicians, since at one point, that was pretty much all Austin was, musicians trying to “make it”. Bands including Spoon, Shakey Graves, Black Joe Lewis and Gary Clark Jr have all played many rockin’ late night shows at Hole in the Wall. Not only is it an Austin staple but it’s a hang out for many fans of the “Keep Austin Weird” way of life. Many young locals, travelers, drifters, gypsies, you name it, conjugate at Hole in the Wall. You can get a good idea of the crowd simply by using the bathroom and seeing all the art and signatures of visitors throughout the years. Might want to hold your nose while reading all of those interesting notes on the wall but hey, that’s part of the charm! Band come from all over the play a show here, especially San Antonio bands.

Throughout the years, the layout has changed quiet a bit, due to the influx of people and high rent prices, especially on a famous place such as the Drag. Less than ten years ago, Hole in the Wall had several bars throughout the venue, including the back patio where many hipsters sat drinking their Lone Star Beers, smoking cigarettes and discussing philosophy…or just one of the new bands in town. The back patio was recently rented out to a few different venues including East Side Kings which serves quite the fusion of food and is now an Austin favorite. Now serving craft beers in a friendly beer garden if you choose to take a break from the jamming bands inside.

You can catch a wide variety of music at Hole in the Wall. Including a folk band that plays a washboard, a Native American metal band that comes in to visit from San Antonio, good ole blues bands and so much more. If you check out the websites calendar, I’m sure you can find several shows to your liking since they do have two stages. One in the front room that is usually filled with couples or small groups huddled around one of the small tables in front of the stage with more laid back tunes. Or you can melt your face off in the back stage with a local metal or punk band giving you their all.

In 2015 Hole in the Wall was threatened to close its doors due to the high cost of rent but as us Austinites stick together and try to preserve the culture, the owner of Austin’s Pizza decided he would not allow that to happen and kept the doors open! Many people were grateful and relieved to hear their favorite hot spot in West Campus will continue to thrive and bring more local music to the fans. Bottom line, Hole in the Wall is a must whether you’re from out of town and here for ACL, SXSW or just looking for a hip scene that won’t disappoint. 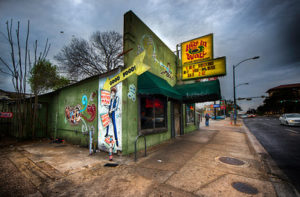 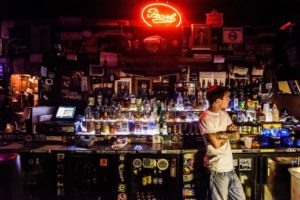 512.651.0505
Chat with us
Email Us
Find an Agent
Don't Wait!
Talk to one of our full-time, experienced
Realtors before someone else does.